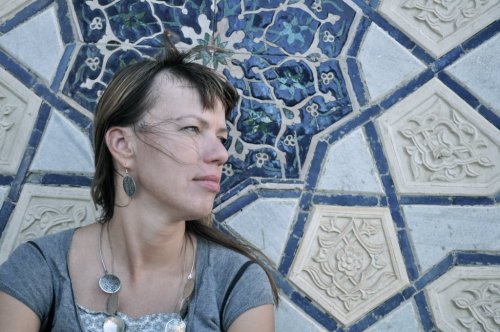 She graduated from the philological faculty of the Taras Shevchenko National University of Kyiv. Now she lives in Moscow.
She is an author of the plays "Dusty Day", "Morphology", "Mayakovsky goes for sugar," "Light my fire", "Important things of Sforza`s family", "Decalogue".
On the documentary plays the following plays were made "That's yes" (Theatre on the Spassky; Kirov), "Villages.net» (Altai State Regional Shukshin Drama Theater; Barnaul)," Plus-minus twenty "(" Ilkhom " theatre; Tashkent)," Kiss! "(Prokopyevskiy Drama Theatre). She is the director of her own play "Dusty Day" at The Center of Drama and Directing of A. Kazantsev on Begovoi (Moscow). The play "Because of" (Moscow) was created in collaboration with the students of Kamenkovich-Krymov`s workshop (GITIS) .
The play "Alice and the state" based on A. Denisova`s play ; it is presented at The Meyerhold Theatre Centre(Moscow) and is the nominee for the National Theatre Award "Golden Mask" -2014.
Sasha Denisova is an author of "Light my fire" at Teatr.doc, who became the winner of the "Golden Mask" in the category "Experiment" in 2012 .
She received an additional education in "The School of Theatre leader" which is established by the Culture Department of Moscow –she has diplomas of The Meyerhold Theatre Centre and Moscow Art Theatre School.

Sasha Denisova is the author of the short stories collection in the journal "New World" 2011 - "Candy."

She is a teacher of the stage direction magistracy at The Meyerhold Theatre Centre. She gave lectures at the School of the Moscow Art Theatre.
She wrote  plays "Mayakovsky goes for sugar," "Nine of ten," "Enemy of the People" especially for Mayakovsky Theater. Now she is rehearsing the play "Decalogue", which will open the "Scene on Sretenke" of  Mayakovsky Theater.

She leads the author and documentary theater studio "Studio-OFF», created in the repertory theater for the pedagogical work with the actors for the first time – there are improvisation, observation, lively theatrical process, searching for theatrical language.

She is an associate creative art director of The Mayakovsky Theater.