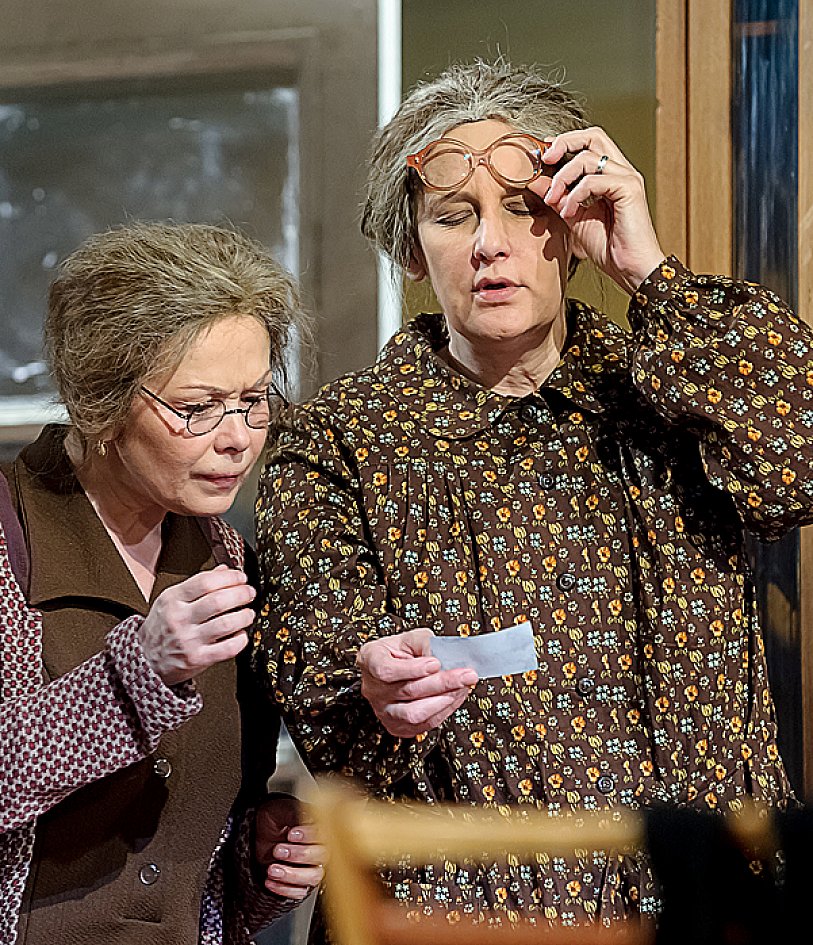 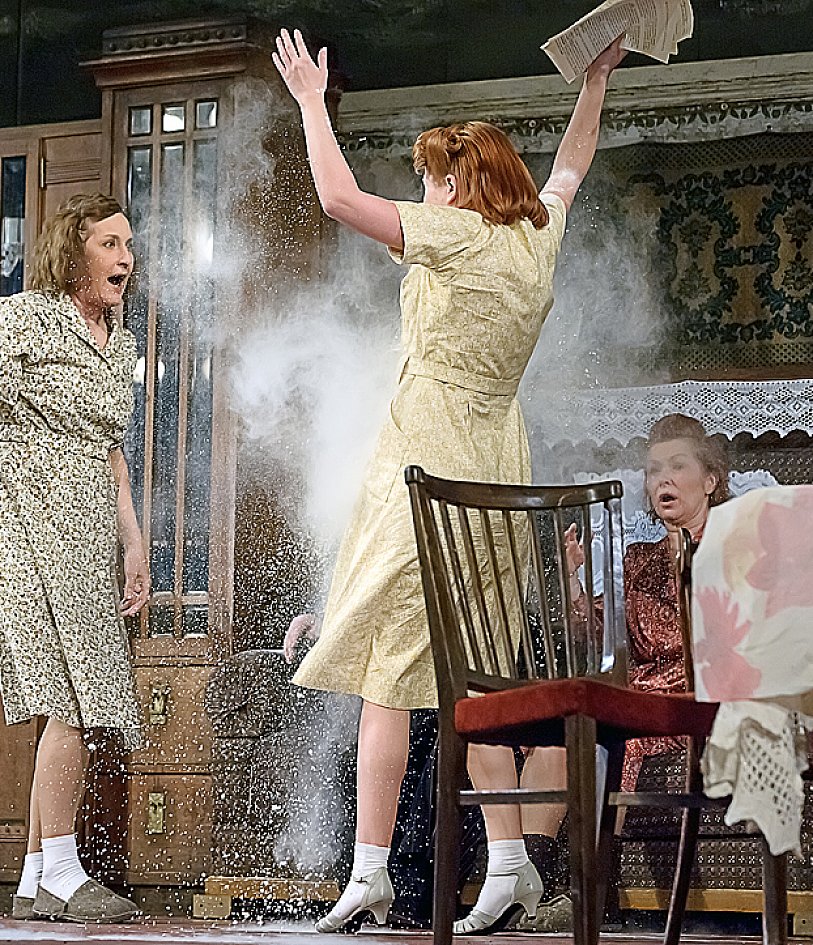 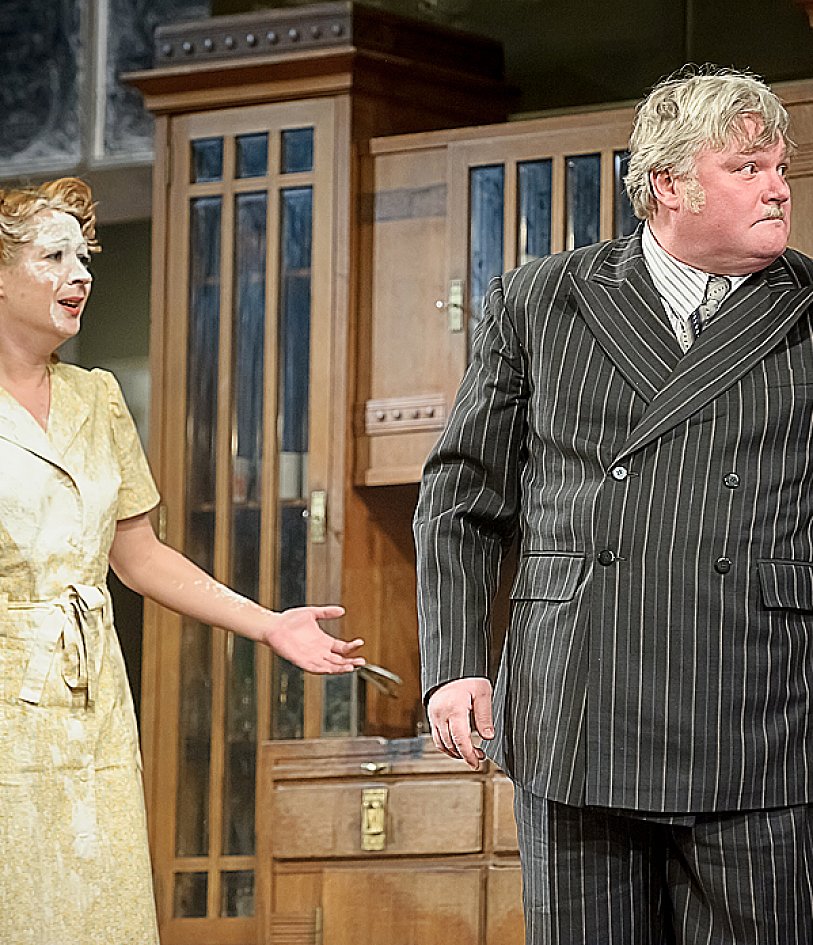 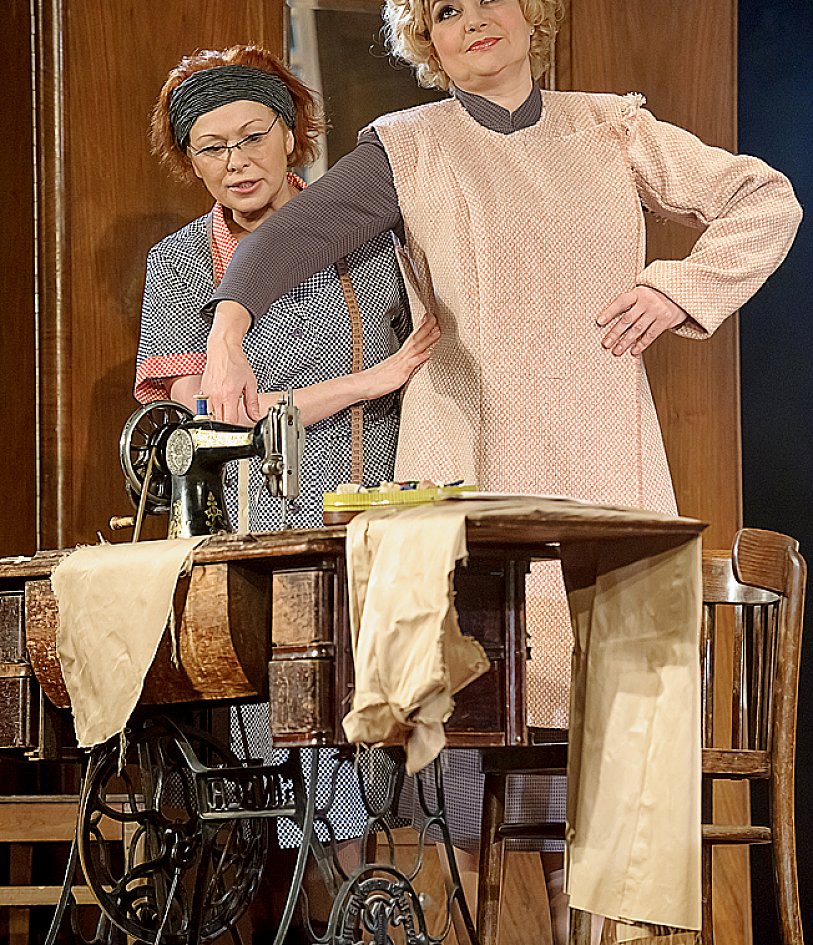 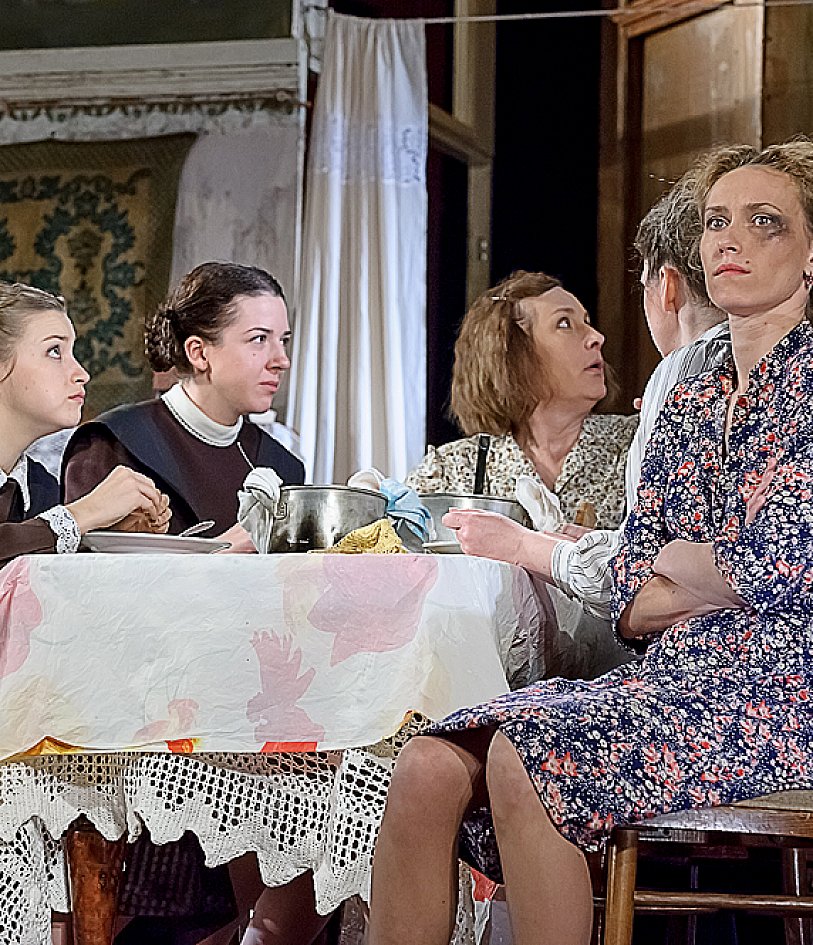 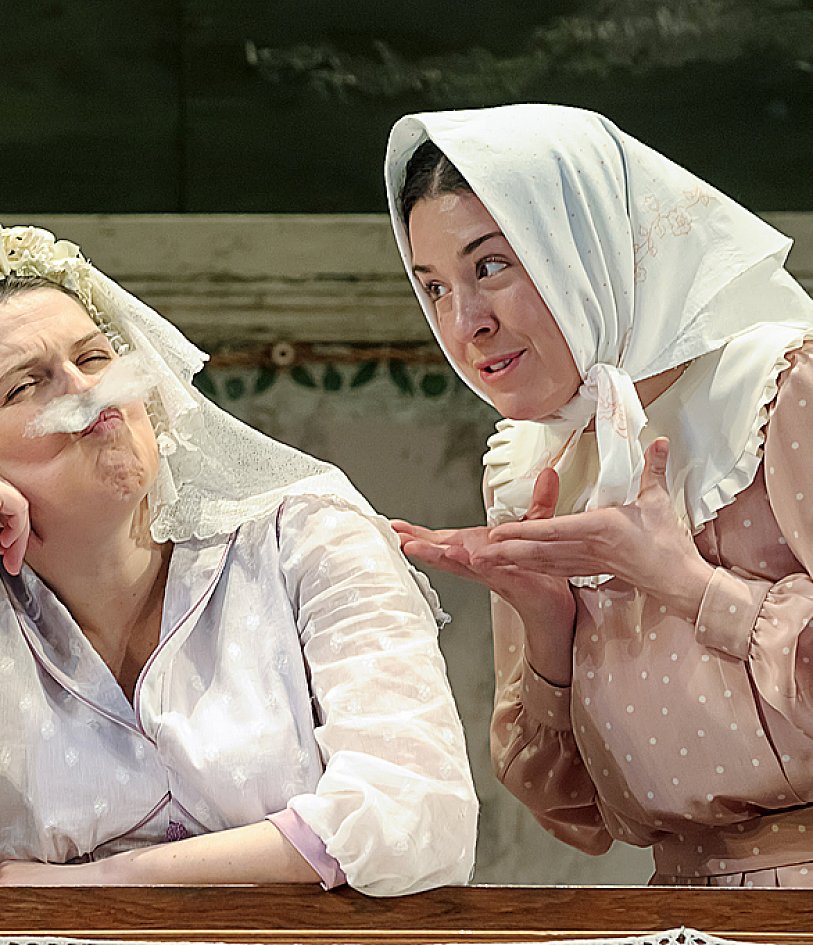 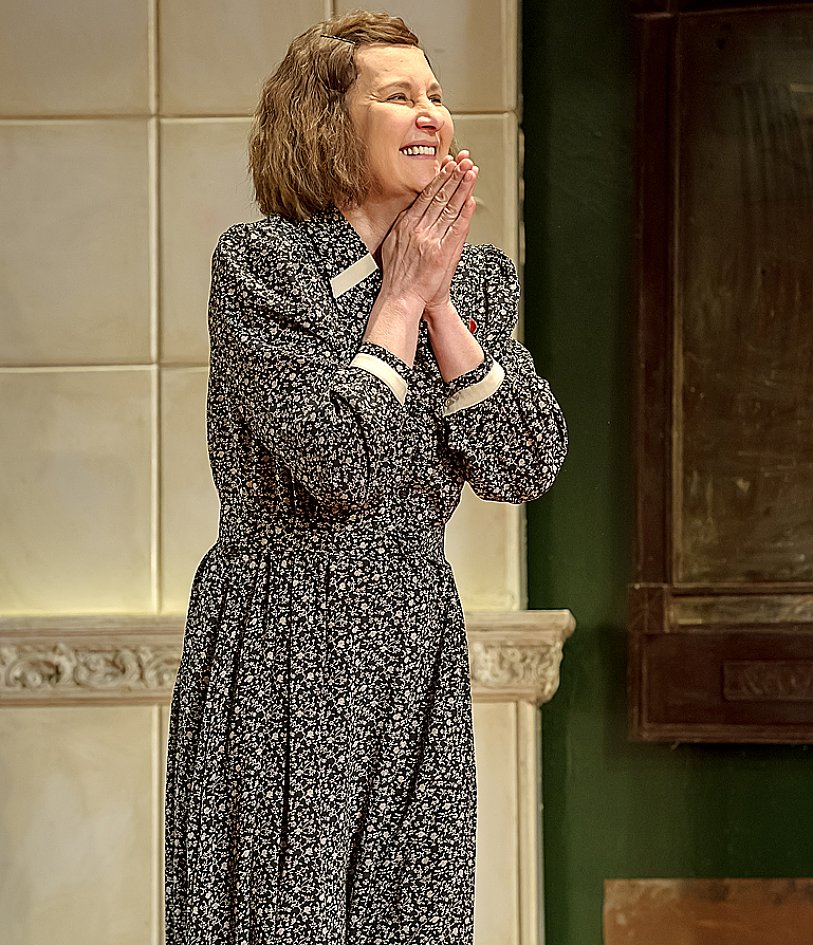 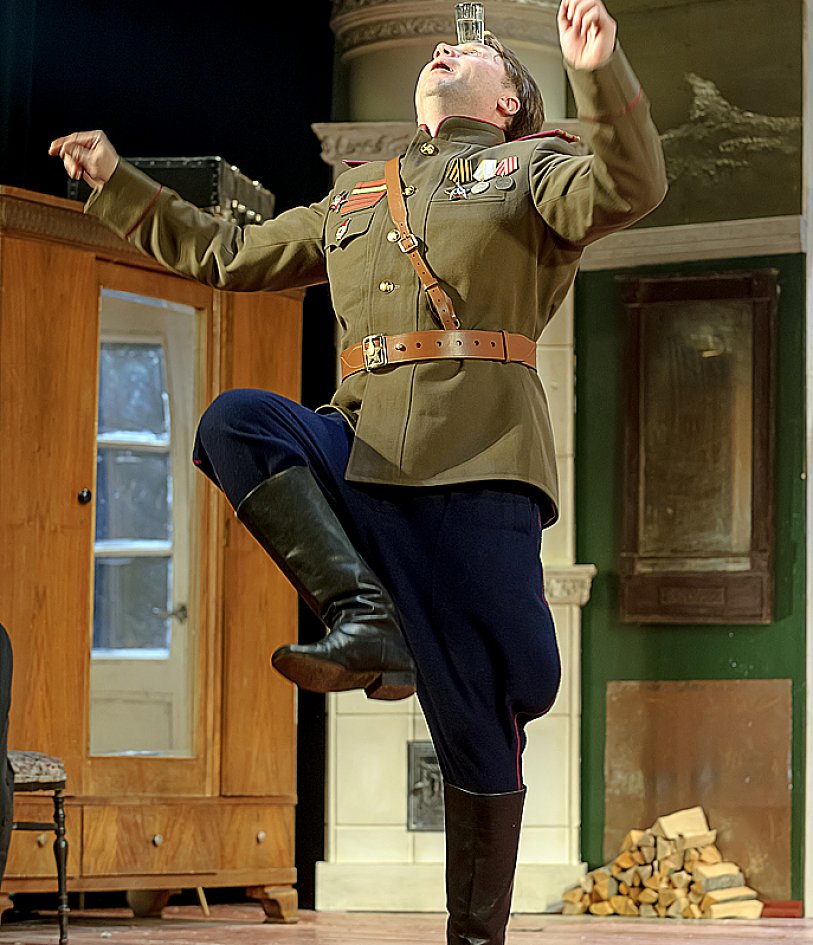 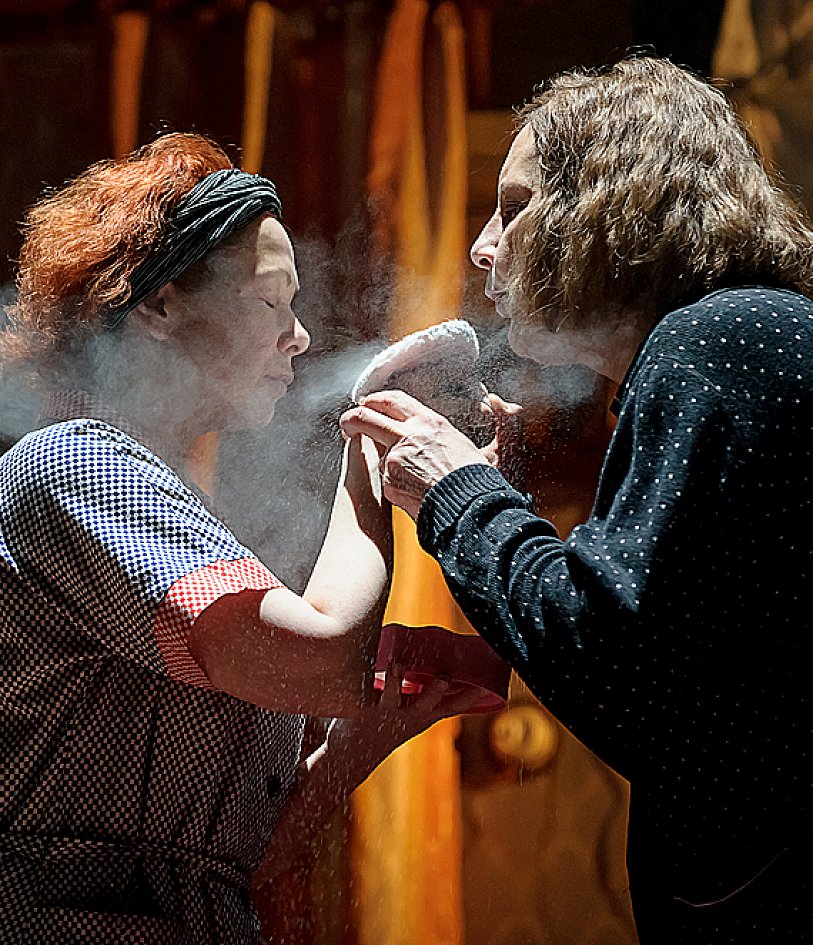 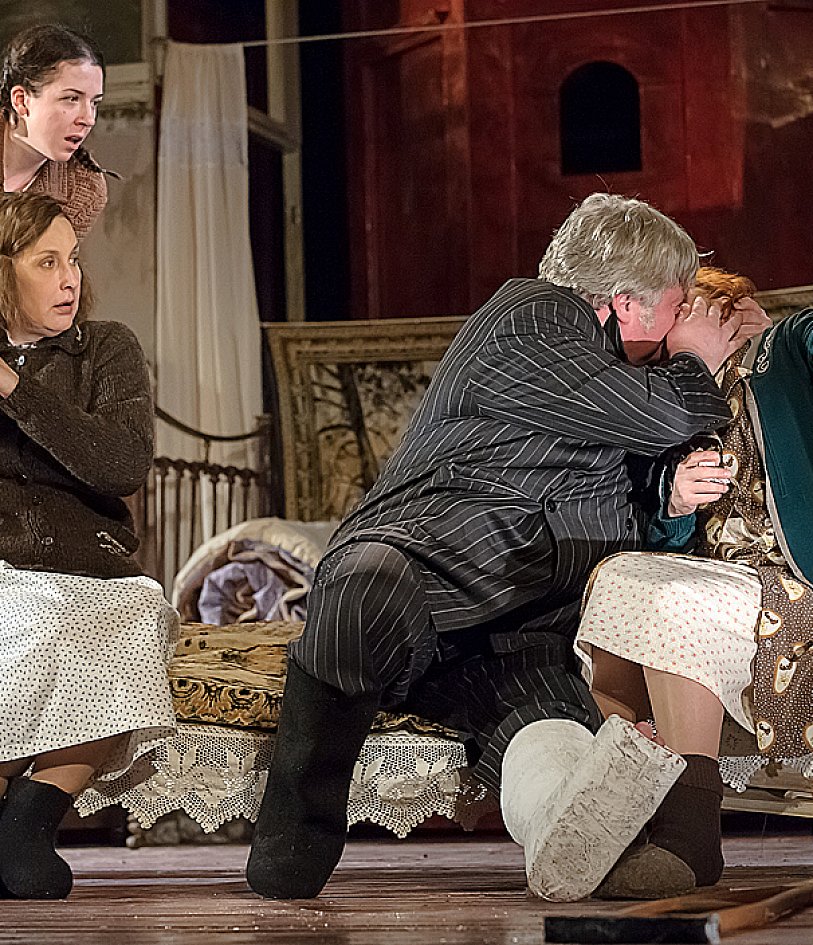 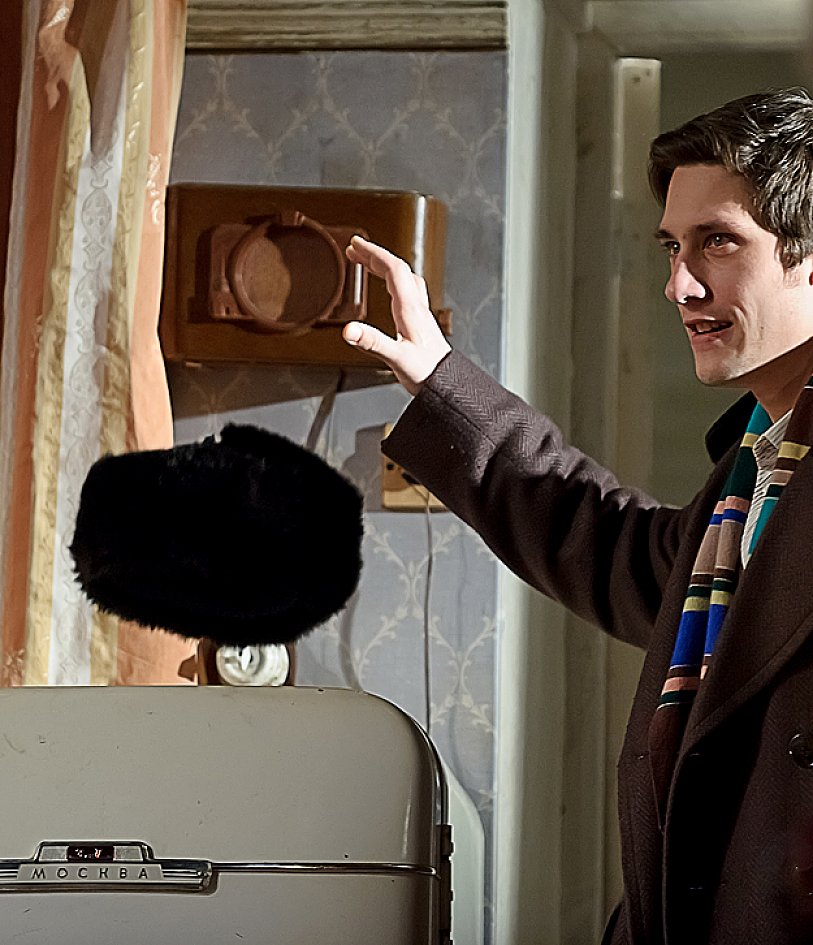 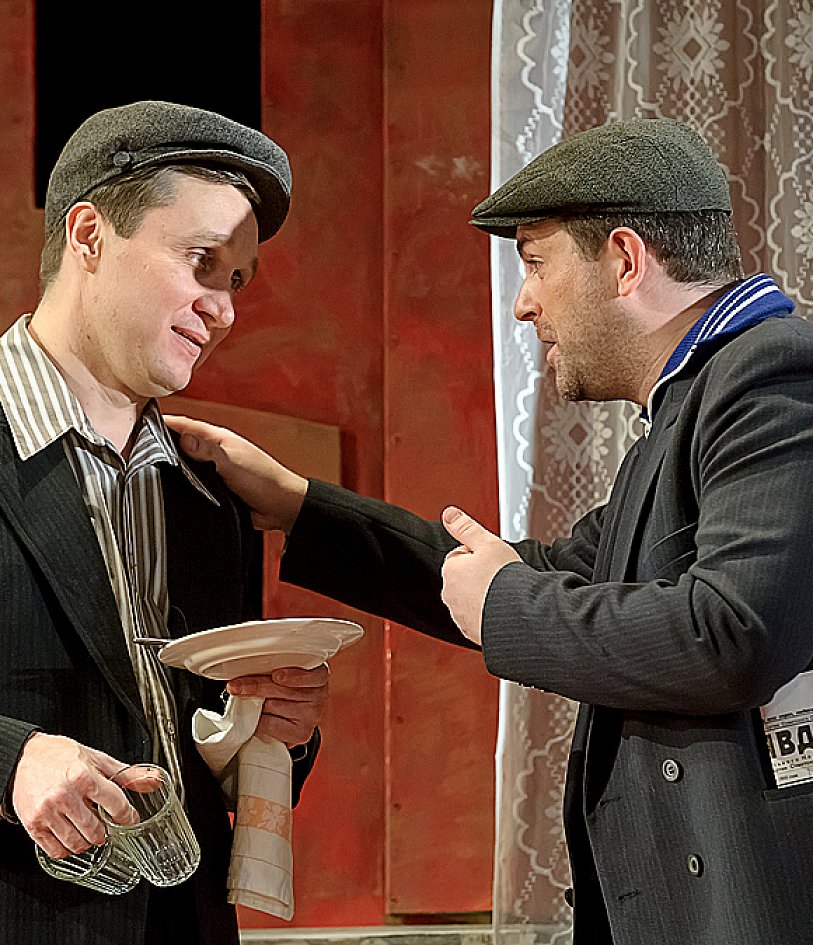 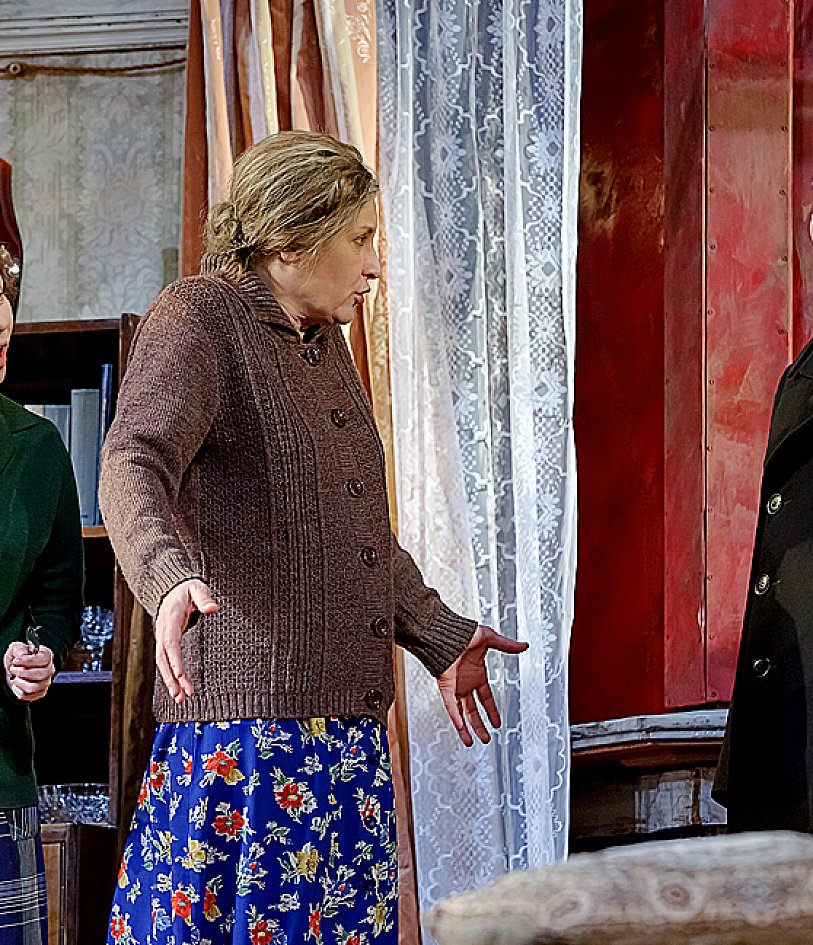 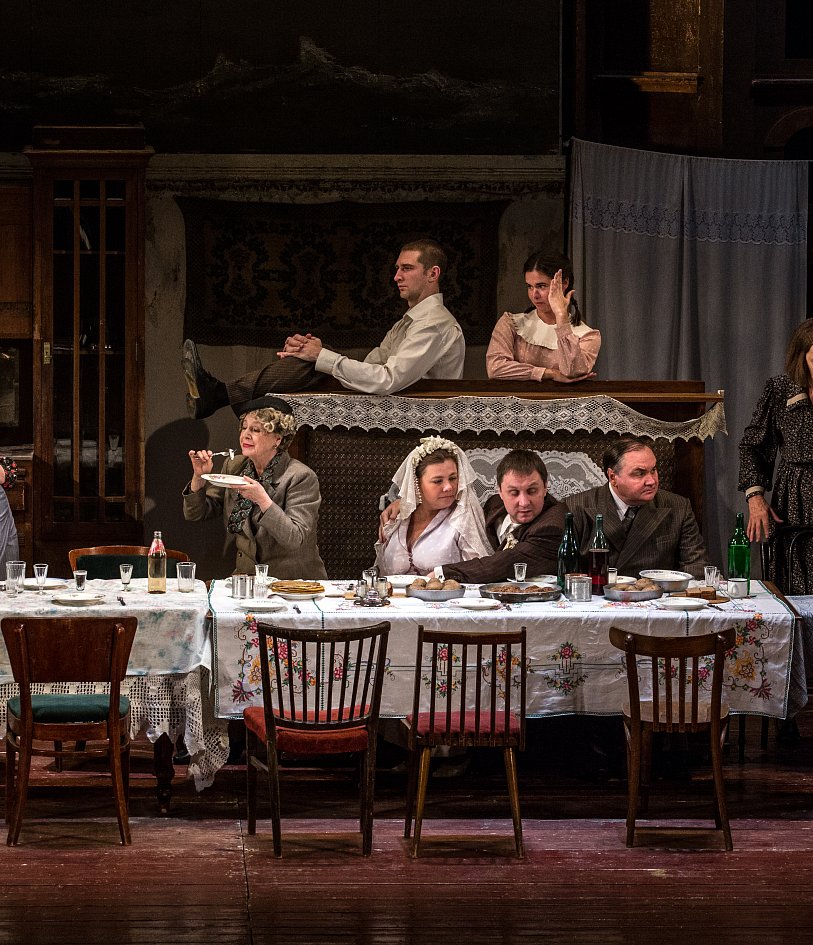 The world premiere took place at the Mayakovsky Theatre.

The playwright–is a novelist , screenwriter Friedrich Gorenstein . In Russia he is  known primarily for his work in cinema : as an author of the scripts for the films " Solaris" by Andrei Tarkovsky , " Slave of Love " by Nikita Mikhalkov  and etc.
"Berdichev" is the saga of postwar life , and it is spanning thirty years - from 1945 to 1975 . In the center of the story - the fate of two sisters , Rachel and Zlota, and their families . Here dresses are sew, here they brawl and curse , and curse so strong that  you are very hurt  and can lie on the ground. Good jam and good soup with flour and beef fat are cooked here, though Brofenmaher  wants to bring his slops from of his job to this apartment .But he can`t do it because Rachel has a strong character. Rachel calmly irons clothes and calmly shouts “Fire!”. And she lives her life in the same calmly way. And an angry teenager Willya lives with these two woman and constantly curse them (Gorenstein wrote his own character mercilessly ).

The main characters cry and say: “Oh the world! I lost my years ! " And all the performance is about this lost years. Wardrobe, Singer sewing machine , dining table , beds with the iron headboard , napkins in the style of Reshele – all this is a postwar Soviet way of life  and it lives and breathes for decades , though new things like radiograms and refrigerators appear .

The Buffet , the center of this Berdichevskoy cosmogony is immutable all 30 years because the buffet – is The Buffet. The Berdichevskaya`s water tower  is recreated on the stage. The tower was burned and destroyed  and repainted as Kaptsan – Lutsky family - her biography is on the background of the era.

Stage director  Nikita Kobelev: "This play is not only about  a Jewish family , but also about  the very concept of a family. Rachel , the main character, spoils daughter's life and she greatly affects on her children and on the all people around her . But the more they try to become dissimilar parents, so apparently there is more similarity between them. The history of the family is always a conflict between an old and new generation. Gorenstein also it has. But through conflicts there devotion and love appear , which are deeply hidden ; there are very strange , subtle connections between people who have had to live a long time together  - at one time, in one place. "Berdichev" - is the story about family line that in all destructive processes has rod of relations and , of course, lives  in the memory. They remember those whom they have lost, and we face the history of XX century in one family in a Jewish town.

"Berdichev" in The Mayakovsky Theatre -  is a serious  attempt for audience success ... Hall reacts vividly . Crying and laughing , as if they did not allow themselves emotions for a long time and now they just couldn`t resist .
Natalia Vitvitskaya "Your Thing " magazine

Perceive of "Berdichev"  is as TV series about events in a large family . Actors , especially the female lead roles, have done much to learn  and to assign for themselves the natural specificity ... Colorful border , beyond which grotesque folklore lies , not already overstepped . All this makes it easy to predict the success of the performance with the public .
Roman Dolzhansky , "Kommersant" magazine

Finally : it is  a new , really new play to the public. Though it is a patriotic one. With persons ,destinies and characters in the best tradition of " theater for the people" , with excellent performances by the troupe of The Mayakovsky Theater .With the psychological and historical veracity and fine performance.

With warmth and laughter ...

The " Berdichev " has everything to be a hit - and the scenery from the real, not sham things , and text that can be disassembled into the quotes and precise acting ... There is a feeling of incredible warmth and humanity - of which people recall when they nostalgic about a Soviet man .
Elena Smorodinova newspaper "Evening Moscow"